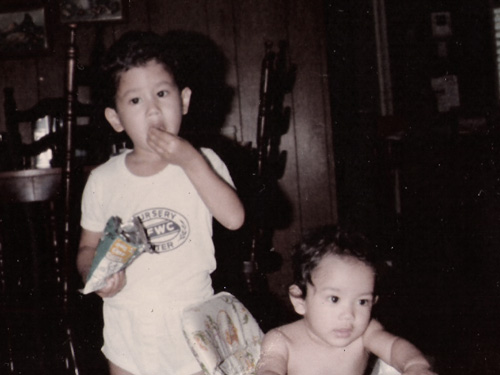 No! This is not about Apple’s legendary founder. I’m writing about the only Steve I love more than Steve Jobs. Much more.

One of the reasons I made it this far in life was due to my brother Steve. I’m the eldest of what is technically four children. Two of my brother’s passed away. One died from a miscarriage and the other one died when he was two days old.

Steve is my only living brother. He was born four years younger than me. I’m supposed to be the elder brother but growing up it didn’t feel like it. Sure when we were kids I was the boss of him but that didn’t last long.

I got sick when I was ten years old. Pompe disease reared its ugly head during that time in my life. It was easy at first. I could still do a lot of the things I wanted to. As time went by it became more difficult though. Over the years I lost my abilities slowly until late in my senior year of high school I had to use a wheelchair already for long trips at the mall or whenever I needed to walk long distances.

Steve made that transition fun. I remember he was about 12 or 13 at that time. Whenever we’d go to the mall he’d push me so fast and pretend we were racing around. He understood what I was going through and never gave me grief about it.

He was patient all throughout the time I was adjusting to my disease. Often times he would give way to my requests even if he wanted to do something else. That’s just how he was.

One story though that up to now still resonates with me is a story about how selfless Steve is.

Steve has a habit of thinking about others first before himself. I think he got that from my parents.

Now why am I singing his praises? Well for one because he deserves it. Second because in my own small way, this is how I can honor him on his birthday.

So happy birthday to the best brother a guy can have. Even though we don’t see each other much nowadays it doesn’t take away from the fact that I love Steve very much and wish Steve all the blessings in the world.

Welcome to my corner of the virtual world. I mainly put up this blog to chronicle my fight against Pompe Disease. A rare genetic disorder. Apart from that I wanted to write about things I've learned going through my experience, stuff I love which includes design and a bunch of other stuff. I hope you enjoy reading my entries. Check out my about page for more details.